Is the current crisis affecting real estate sales? Of course. The  business is very restricted in what we are able to do. And given all of the social distancing guidelines out there, the very face to face nature of viewing and purchasing property runs counter to that.

Sales have fallen substantially, year to date and especially in the last 30 days. As the chart below shows, sales in March fell 9.9 %, with only 173 units closing. More telling though is that new listings are down an astonishing 45%, from 393 last year to 214 this year. April numbers will be down as well, possibly even more.

This does not mean that there will not be any homes for sale. Our MLS service, BAREIS, recently added a “Coming Soon” feature, which basically publishes all of the home details that you normally see in a listing out there, as well as any photos that are available. Right now there are 59 listings in this category!

“Coming Soon” is not shown on any real estate web service other than MLS, so if you would like to be subscribed to that, please send an email to me (bravasio@cbnorcal.com) and we can set you up on this exclusive service.  Properties can now be on “Coming Soon” as soon as 100 days before actually getting listed.

It is tricky to predict the future of the market right now, but in general, we see things coming back once the current crisis settles.

On the down side – and this is a big one – one in nine California workers have filed for unemployment (including some real estate sales people, by the way!) We believe the Bay Area numbers are not as severe, as the tech industry has not suffered as much. There have certainly been tech layoffs, especially in travel oriented companies. Service workers, such as those in restaurants, have been especially hard hit. This is all still unfolding, and we don’t know where it will go.

On the up side, major market factors are still in play that will help real estate sales. First ,  interest rates are historically low, and given the economic conditions, no one is forecasting that they will rise significantly. So the cost of home ownership remains low.

And in California, demand for housing has been high. The state is trying to get more housing built, but it is going more slowly than they would like. The most recent projection I saw had the shortage of homes in the millions – but that was before the current situation.

We also do not see this anything like the 2008-2010 market crash for one major reason: home owners have equity this time. The last market crash was driven by highly leveraged mortgages including 100% financing, so that when home values fell, owners were suddenly in a negative equity position. This accelerated and exacerbated the downturn. I have not seen any 100% financing at all since 2008, and in fact no home purchase with less than 20% down. Actually,  many have more than 20% down. The banks became much more conservative in how they wrote loans, so even if this is a sustained crisis, I don’t see a downturn like we saw in 2010, when average sale price fell over 20% in Marin.

So bottom line is that this situation is evolving daily, and will continue, but at this point, we do not see a significant down turn on the horizon. 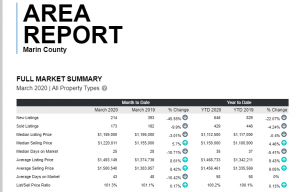