It Has Been Really Hot In Marin This Week . And So Is Real Estate!

We had some friends over on Sunday, and they said it was the hottest day since we had lived here, and I think they were right- I know it hit 108 in Corte Madera and we have been here since 1991!

It is a little cooler now, but not in real estate. The stats for August just came out and the numbers are high- higher than my expectations, which were pretty high. 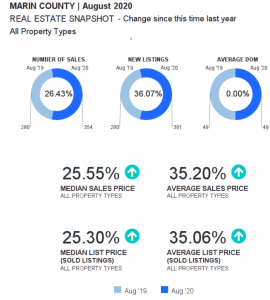 Most experts ( and us as well) had predicted pretty much flat sales numbers for this year, after seven years of major increases. But Covid 19 changed everything. The numbers are even more striking when you consider that real estate was basically shut down for half of March and most of April.

Buyers are trying to get out of San Francisco to somewhere that has lower density,  bigger parks, more open space, and  Marin County is right at the top of the list for those things. More businesses letting people work from home also means commutes are less of an issue, so that contributes to the trend as well.

And it seems to be continuing. Just since Sept. 1, there have been 44 single family homes sold in Marin, and they are selling for an average of 102% of the list price. We have a sales meeting every Tuesday (via Zoom of course) and part of the meeting is devoted to stories about multiple offer scenarios. We listed and closed 103 Twelveoak in San Rafael last month-and received 13 offers!

Inventory is still strong. There are 731 properties on MLS right now, which is a number more typically seen in May. But 42% of those are already in contract, which is a Sellers Market. Under $1 Million is strong as well : 44% of the 252 homes available are in contract.

How long can this be sustained? It’s hard to tell. Our friend Rob Chrisman, who writes a daily newsletter for the mortgage banking industry (and a few real estate people) wrote today:

“On one hand we have the old adage, “No tree grows to the moon.” On the other hand, 52 percent of young adults live with their parents. What does that tell you about the demand for housing and loans in the coming years?”

So long term there may be more upside than we had even thought!

In September we typically see business pick up from a quiet August. After a red hot August in 2020, stay tuned.